Each year, at least 3,000 children are injured and an average of nearly 60 kids are killed in frontover accidents in the United States. 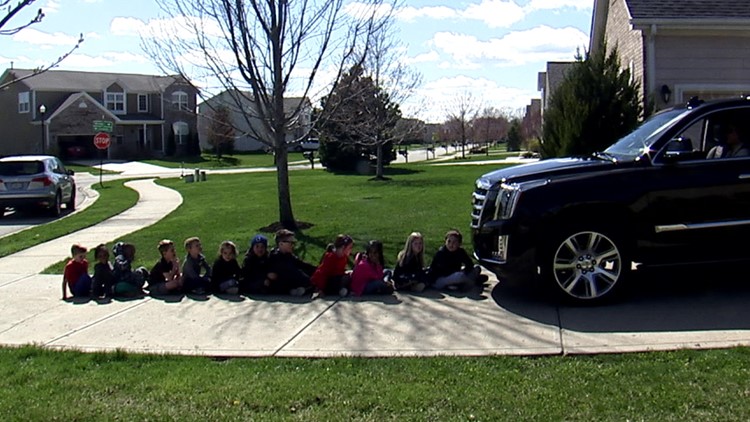 INDIANAPOLIS — Millions of vehicles have a large and potentially-deadly blind zone that many drivers don’t know about, and a U.S. senator is now asking federal regulators to address the problem.

“I want NHTSA to act as quickly as possible so lives can be saved,” said Sen. Richard Blumenthal (D-CT).

This month, Blumenthal sent a letter to the National Highway Traffic Safety Administration to express concern about “large blind zones in front of SUVs [that] are reportedly causing senseless deaths of children.” He also asked the agency to explain what steps it has taken to prevent accidents and deaths caused by the blind zones.

“A 2019 demonstration found the blind zone in front of a large SOV to be 15 feet,” Blumenthal wrote, referencing the 13News report. “A blind zone of this size is simply astonishing.”

That blind zone – located directly in front of SUVs, pickup trucks and other large vehicles – has contributed to hundreds of deaths and thousands of injuries, but many drivers are unaware of the problem until it’s too late.

RELATED: 13 Investigates: The hidden dangers of your vehicle’s ‘blind zone’

Blumenthal is asking NHTSA to attack a phenomenon known as frontovers, accidents that occur when a victim in front of a vehicle is run over by a driver who cannot see them.

Most of the victims are children, and Indiana has seen its share of tragic frontovers.

Earlier this year, a 16-month-old boy in Randolph County died when his father pulled a truck out of his barn, striking the child he did not see. A 7-year-old Mishawaka boy was killed in 2018 when a neighbor ran over him as she attempted to pull her SUV into the driveway. On the west side of Indianapolis, a 2-year-old girl was hit and killed by the driver of a SUV who did not see her in the parking lot of a carwash. And 15-month-old Noah Dreblow died when his grandfather attempted to move a van a few feet forward so his grandkids could have more room to play basketball in his driveway. 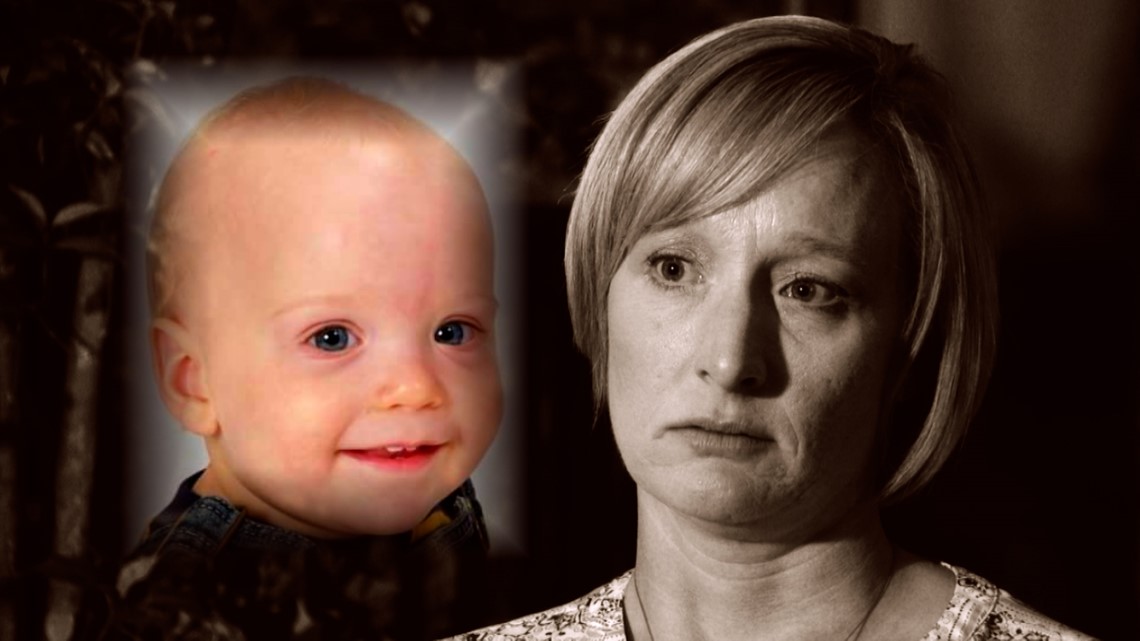 “It was seconds – seconds – and it happened,” said Erica Boyer, Noah’s mother. “Noah loved basketballs. He saw one in the driveway and he ran after a basketball, and my dad had no idea what had happened. Didn’t see him. He didn’t even feel the bump of hitting him.”

Boyer recalls getting a call at work telling her to rush to her parents’ house, where she learned paramedics had declared Noah dead at the scene of the accident.

“I was greeted by two sheriffs and a state trooper, and I said, ‘Just tell me my baby is OK.’ And they said, ‘We can’t do that.’ That’s when I knew,” the mother told WTHR in 2019. “Your life changes in an instant.”

“We really feel we can see what’s in front of us, and if you tell somebody they can’t see 8 feet in front of their vehicle, they think you’re crazy,” said Amber Rollins, who maintains a national frontover injury and fatality database for safety organization KidsAndCars.org. “Unfortunately, not a day goes by that we don’t add a child to our database.”

That database shows each year, at least 3,000 children are injured and an average of nearly 60 kids are killed in frontover accidents in the United States. Over the past decade, the numbers have jumped dramatically due to the increased popularity of large SUVs that have very large front blind zones.

Rollins said she suspects the actual number of frontover accidents nationwide is much higher than what her organization has tracked through media and police reports because many frontovers that do not result in a fatality go unreported.

And unlike motor vehicles accidents that take place on public roadways, frontover accidents — which most often occur in driveways and parking lots — are not included in the federal government’s routine traffic injury and fatality reports. NHTSA is required to publish data on non-traffic accidents (which would include frontovers on private property) every two years, but Blumenthal said that has not been happening.

“NHTSA simply has failed to compile and make public the kind of surveillance data that would enable us to know how common these tragedies are,” Blumenthal told 13News.

In his letter to NHTSA, the senator called out the federal safety agency’s frontover data collection as “lacking” and “out-of-date,” and he requested the agency release more current statistics.

“This delay in more than a decade in releasing data is simply unacceptable. Recent, updated data is critical to understanding the true scope of frontovers and the steps that can be taken to prevent these tragic incidents,” Blumenthal wrote.

“If a child is run over in a driveway or a parking lot or an alleyway, that child’s death will not be counted anywhere,” Rollins said. “There should be more rigorous reporting on these kinds of incidents. It’s got to start happening and, quite literally, people’s lives depend on it.”

Because many drivers are unaware of the danger surrounding frontover accidents, 13 Investigates conducted several demonstrations in 2019 to help illustrate the significant size of front blind zones in large vehicles. Those demonstrations shocked drivers, unaware they could not see objects directly in front of their SUVs.

Haven Hutchens agreed to participate in one of the tests to determine the size of the front blind zone on her 2011 Chevy Tahoe. With the help of family and neighbors, WTHR lined up children in front of her parked SUV, and Hutchens agreed to alert 13News at the first sign of a child. As she watched one child after another move toward the front of her vehicle to take a seat on the pavement, Hutchens expressed surprise.

“I can’t see any of them. That’s shocking,” she said after the fifth child sat in front of her SUV.

“That’s super scary,” she added as two more kids joined the line of children. “I still can’t see them.” 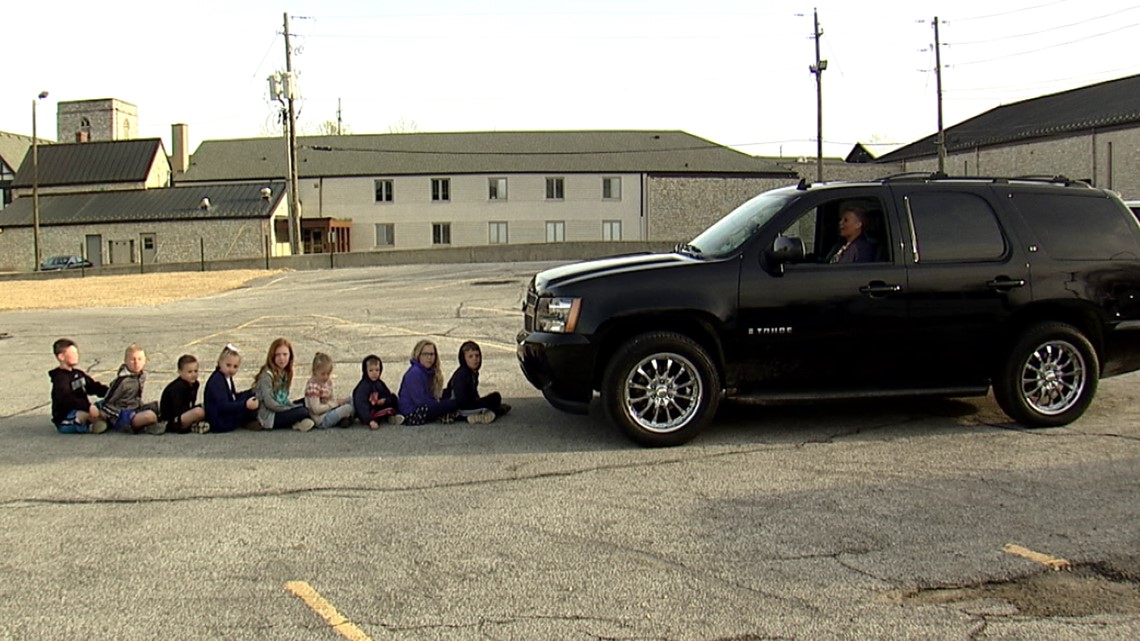 It wasn’t until an eighth and then a ninth child joined the experiment that Hutchens could see the very top of a child’s head, warning her of the potential danger hidden directly in front of her. The blind zone in front of her SUV stretched nearly 10 feet from the front bumper.

“Oh my gosh, it’s absolutely terrifying,” she said after the test was completed. “That is really eye-opening. I had no idea that the blind spot was that bad.”

The blind zone in front of other vehicles is even larger.

Lindsey Berry helped 13 Investigates measure the blind zone on her Cadillac Escalade. During WTHR’s experiment with Berry behind the wheel, a dozen children sat in a single-file line in front of her Escalade. She couldn’t see any of them.

“That is so scary,” Berry said during the demonstration, which included lots of kids from her neighborhood. “This is just mind blowing. I can’t believe it.”

The test ended when Berry got a glimpse of the 13th child who sat in front of her SUV. That child was 15 feet from her front bumper. 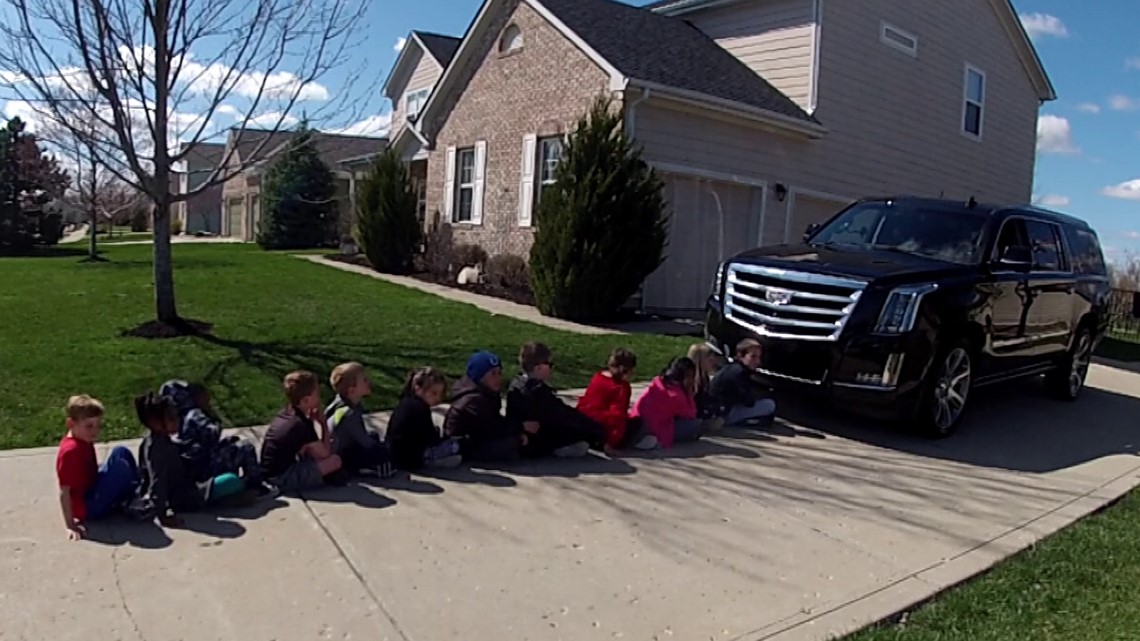 “I’m in shock, and I think this is very alarming,” Berry said. “I like having that vision being up high, but at no point did I realize it was 15 feet in front of me that was blocked. I’m still trying to wrap my head around the fact there’s 13 children lined up in front of me right now. It’s a mother’s worst nightmare.”

13 Investigates measured the front blind zones of many popular vehicles, from family sedans and minivans to large SUVs and full-size pick-up trucks.

The blind zones can vary widely based on a number of factors, such as the height of the driver, the size of the object in front of the vehicle, the position of the driver’s seat, and the incline (or decline) of the driving surface. To minimize those variables, WTHR measured each vehicle’s blind zone on a flat surface using a 5’4” driver (the average height of a woman in the United States) and a 28” traffic cone (the approximate height of a 1-year-old child). The testing was also conducted with the driver in two different seating positions.

The test results show most SUVs, minivans and pickup trucks have a front blind zone measuring between 5 and 10 feet – two to three times larger than the front blind zones of most sedans and compact cars – when a driver sits in a normal seating position. Some larger SUVs and pickups have grills and hoods that measure more than 4 feet off the ground, which is taller than an average 7-year-old child.

While the larger vehicles featuring higher seats may improve the ability of drivers to see objects at a distance, their larger front blind zones mean impaired visibility at close distances directly in front of the vehicles.

“These are important and eye-opening demonstrations, and they help people understand that a child could be there and they would have no idea,” Rollins said.

“I was shocked and astounded,” added Blumenthal. “It’s something I think everyone should see.”

The senator also wants safety devices on all new vehicles to help reduce the number of victims killed in frontover accidents.

Blumenthal points to a 2008 law passed by Congress that required automakers to install rear-facing video cameras on all new vehicles by 2018. Those cameras, now standard equipment on all new vehicles sold in the U.S., dramatically reduced the number of fatalities caused by drivers who accidentally back over a child in a rear blind zone located behind the vehicle. 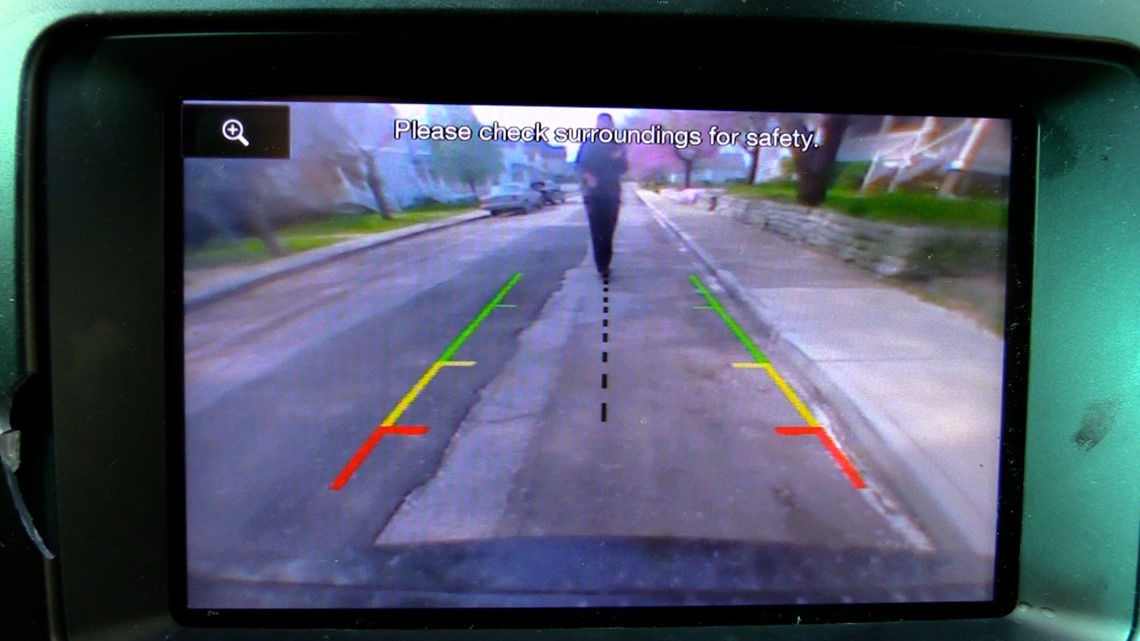 “There should be the same kind of mandate for front visibility as we now have for rear visibility,” Blumenthal said. “There ought to be some sort of camera or sensor to tell drivers that there is a child in front of a car that may not be visible over the hood. Without that, these tragedies are going to continue.”

Some automakers already offer a front-facing camera on their vehicles, but it is often considered a safety upgrade available only on more expensive models.

“Safety devices should not be a premium available only to people who can afford it. It ought to be a required mandate for cars to save lives. Safety should be the default. It’s not a luxury or a convenience,” the senator told 13News.

Blumenthal hopes automakers will install front cameras or blind zone sensors without a mandate from Congress. If they don’t, he wants NHTSA and Congress to act quickly. 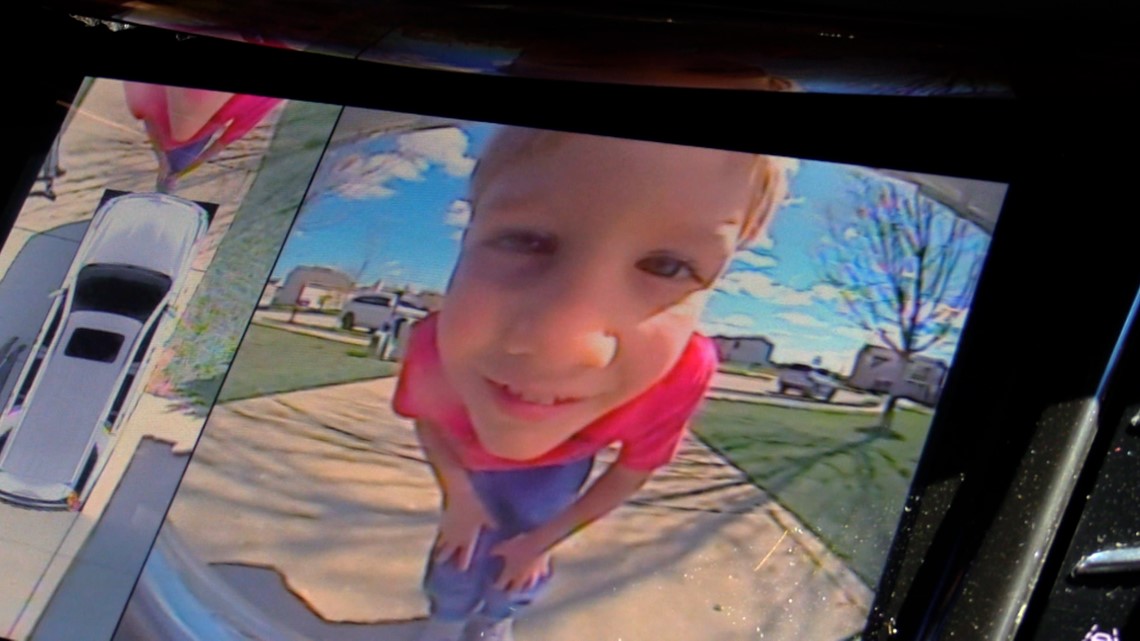 “I really am deeply disappointed they’re not offering these devices more widely, but we’ll mandate them if necessary,” Blumenthal said. “We need these devices on all cars to save lives.”

If your vehicle does not have a front camera, KidsAndCars.org recommends that you walk in front of your vehicle to check for potential dangers before you get in and start the ignition. And the organization says all toddlers should be accounted for any time someone is arriving or leaving your home to reduce the risk of an unattended child accidentally running into the path of a vehicle.