Published on Aug 5, 2022
Georgia mom of 6-year-old child who climbed into hot car and died has urgent warning for parents
Published on Jul 13, 2022
Florida child dies after being left in a hot car, 11th in US this year: ‘Horrible — and yet we expect it’
Published on Jun 27, 2022
Experts looking for ways to prevent hot car deaths, new radar technology could detect heartbeats
Published on Jun 17, 2022
How are children left on school buses? Neuroscientist provides perspective
Published on May 13, 2022
Federal law to address vehicle safety standards, crash prevention & increased fatalities
Published on May 12, 2022
Garland father works to raise awareness of hot cars after son’s close call
Published on May 3, 2022
Research Shows That Anyone Could Forget Kids in Hot Cars

Every year, approximately 38 children die from being left in a hot car, according to Kids and Cars Safety, a national nonprofit that tracks hot car deaths and aims to prevent vehicle-related risks to children and pets.

As the U.S. heads into more heat waves this summer and temperatures in the Midwest, South and West soar into the triple digits, there is a concern for parents about hot car deaths. One parent, Peter Hansen, opened up about the issue on social media.

“I have severe anxiety about leaving our kids in a hot car on accident,” Hansen, a father of three in Chicago, wrote in a LinkedIn post. “It’s 100 degrees in Chicago today and the heat is intense across the country. Working from home has me multitasking more than usual, which can distract me from the kids some days, especially if driving on a work call. This is simply a post to make sure your kids are not left in your car in this heat.”

The 40-year-old told “Good Morning America” a recent episode with two of his three kids one morning gave him a scare and prompted him to reflect on the dangers of hot cars and how easily things can go wrong.

“We got doughnuts and came back in the house,” Hansen recalled. “It’s still 7 in the morning – it wasn’t 100 degrees yet – but five minutes later, I was in the house and my four-year-old walked through the door five minutes later, she’s like, ‘Daddy, you forgot me.’ And it was like, I swear I saw her get out of the car … but I was like, ‘Oh my gosh.’ It really terrified me that I thought both of them got out of the car together like they normally do.”

Data from Kids and Cars Safety indicates over 1,000 children, with 87% of them age 3 and under, have died from heatstroke after being in a hot car since 1990 and so far, six hot car deaths have occurred this year, including one in Houston where a 5-year-old boy was reportedly in a car for several hours on a day when the Texas city reached 102 degrees. 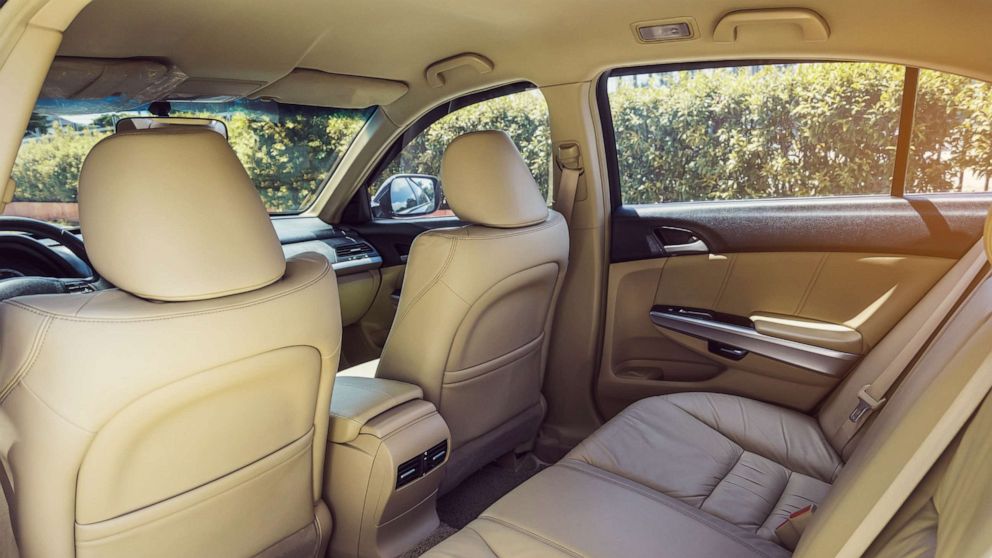 Why do hot car deaths happen?

Amber Rollins, a director at Kids and Cars Safety, said the issue is often misunderstood and even dismissed by many parents and caregivers.

“I think the No. 1 misconception is that this will never happen to me and that it only happens to bad parents and nothing could be further from the truth,” Rollins told “GMA.” “I’ve worked with families that this has happened to for 16 years and they are engineers, school teachers, principals, nurses, doctors, you name it. It’s the type of people that I aspire to be as a parent, the kind that read every safety book about the most expensive car seat and strapped him in so tight and covered every outlet. That’s the kind of person this is happening to.”

According to Rollins, hot car deaths have also been trending upwards for the last three decades, with an exception during the last two years of the pandemic when more families stayed at home.

“In the ’90s, we realized children were being killed by overpowered airbags and children are still safer riding in the back seat. We moved them to the back seat because that’s where they’re the safest. However, now they’re out of sight of the driver,” Rollins explained. “So they’re in the back seat, they’re rear-facing now until age 3 or even longer, depending on the size of the child. And that car seat looks the same for the driver whether there’s a baby in there or not.”

“This is not like parents didn’t just all of a sudden overnight become neglectful and irresponsible,” she added. “This is an unintended consequence of moving them to the back seat.”

How to prevent hot car deaths

Multiple solutions have been proposed to avert a hot car death before they occur. Among the high-tech options include carbon dioxide detection, lidar or light detection and ranging technology, car alarm systems, car camera systems and car seats with weight sensors, each with its own pros and cons.

A new idea, called “Cabin Awareness,” from Toyota would use radar technology, powered in part by a car’s battery, to notify drivers who have left a Toyota vehicle that a child or a pet remained inside the car. 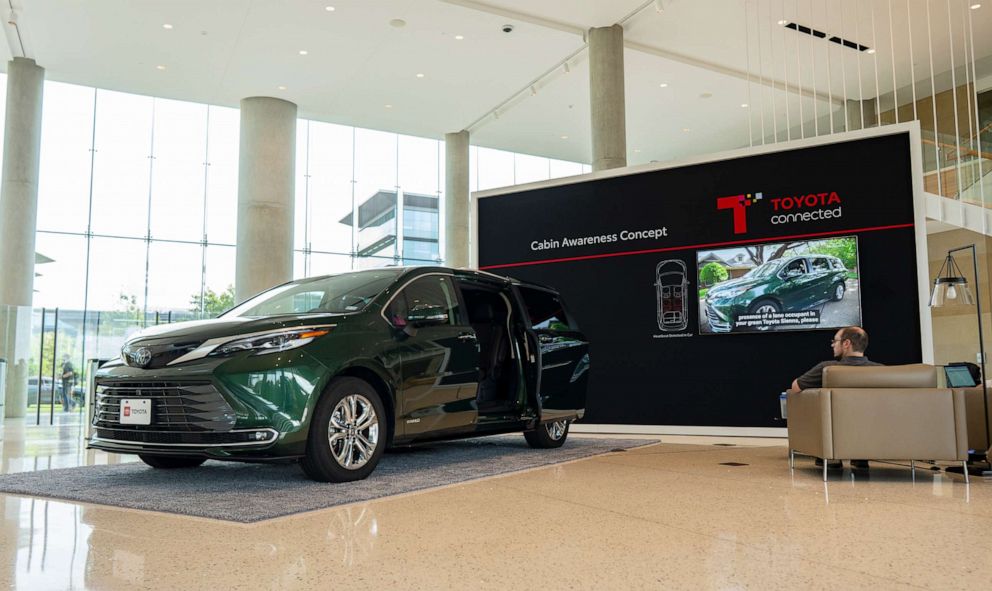 Toyota Connected’s team of software engineers have been working on a project called “Cabin Awareness,” a feature that would use radar technology to sense movements inside a car, including those from children and pets.

Brian Kursar, chief technology officer for Toyota Connected North America and Toyota Motor North America, has led the “Cabin Awareness” project since its inception in 2018 and said the project is moving now toward a testing phase with May Mobility, a Michigan-based company that develops autonomous technology, including vehicles.

“The ‘Cabin Awareness’ concept uses millimeter-wave radar to detect micro-movements and so micro-movements really are the things that a camera can’t see. So it’s also able to understand breathing, heartbeat, and ultimately provides us a solution to something that we’ve not been able to really touch, which is the ability to understand life in a vehicle,” Kursar explained to “GMA,” adding that radar could “see through things like cloth” and go beyond a camera’s line of sight.

Toyota’s “Cabin Awareness” could link up to a driver’s cell phone, a smart device – such as smart lights, a smart speaker, or smart TV – inside their home, or possibly other Toyota vehicles in an environment such as a parking lot and ultimately, contact emergency services when other alerts go unanswered.

“Based on our algorithms, we’re able to understand where in the vehicle that movement is coming from. And then we’re able to now take a number of options to escalate, to let the customer know that there is life potentially at risk in a vehicle,” Kursar said.

This prototype image from Toyota Connected illustrates how their “Cabin Awareness” feature could work in a future vehicle.

“We see this as an opportunity not just to contact the customer. You can give the system a list of contacts such as grandma, right, such as your neighbor, right, and these are additional folks that can start helping to resolve this problem with the vehicle,” Kursar added. “Maybe we can now do a vehicle-to-vehicle ping to say, if you’re within proximity of a child or an adult at risk in a car, now you have this almost community outreach where people in their cars, they turn on their cars, and it says, [someone in] a green Sienna within your proximity, may be at risk for heat exhaustion.”

For now, “Cabin Awareness” is not available in Toyota vehicles just yet and the timeline for a potential rollout will depend on testing results.

In the meantime, Kids and Cars Safety’s Rollins recommends several solutions that parents can keep in mind and adopt this summer.

Adopt the “look before you lock” habit.

“We want to use that habit system to prevent it from happening,” Rollins said. “No matter what, even if the child is not with you, open the back door and check the back seat. Every single time you leave the car.”

“It takes two seconds,” she continued. “And it’s a great way to make sure you’re never forgetting anything, including your children or inanimate objects that aren’t as important but make that a 100% habit.”

In addition to being left in a car, a child or pet can gain access to a car when they’re unlocked, so Rollins also emphasized the importance of utilizing car door locks. “You want to keep your car locked 100% of the time, even if you don’t have children. Little ones can get into neighbors’ cars. It happens all the time. You want to keep keys and remote openers out of reach of children 100% of the time and childproof your home.”

“You want to check the inside trunk and floorboards of all vehicles in the area immediately, even if they’re locked,” Rollins added. “A lot of times, kiddos will get in and they try to get out and they push the lock button. And so people don’t think they’re in there if it’s locked, but they definitely can be.”

MORE: Hot car dangers: How to keep your kids safe this summer

Use a visual reminder.

Rollins suggests keeping a physical object, like a diaper bag, in the front seat or playing a kid’s song to remember that you’re traveling with your child. “If you’re not a diaper bag person 100% of the time, create a reminder object in your car. So throw a stuffed animal in the car seat. And then anytime you put the child in the car seat, that stuffed animal comes up to the front seat with you as your visual cue that the baby is with you,” Rollins said.

Enlist the help of others.

“If you take your child to daycare or anyone, a family member that watches them, whoever it is, you want to make a policy with them. They would call you immediately if your child didn’t show up as scheduled and I mean immediately,” said Rollins. “That one phone call could have been the difference between life or death for hundreds of children.”

Make kids aware of the hazards of a hot car.

“Talk to your kids about how dangerous it is to get into a car without a grown-up and talk to them about never allowing a grown-up to leave them in the car,” Rollins said.

Inexpensive door alarms can be more accessible for parents than full-fledged home security systems in the short term and peel-and-stick options are sold online and in stores.