Washington — More than 50 children died in the U.S. last year after inadvertently being left in hot cars, prompting automakers to voluntarily agree to add back seat occupant reminders to new cars by 2025.

Car manufacturers will add systems to new cars that prompt drivers to check back seats after cars are shut off, as part of an agreement announced Wednesday by the Alliance of Automobile Manufacturers and the Association of Global Automakers, which represent domestic and foreign-owned carmakers.

Miles Harrison, of Purcellville, Virginia, whose 1½-year-old son Chase died after being left in a hot car accidentally in 2008, says carmakers should go even further and add systems that actually detect a child’s presence with in-seat sensors.

He said the types of technology covered by the agreement would not have saved his son. These so-called “door-sequencing” systems rely on technology that remembers if rear doors were opened before a trip to determine if drivers need to be reminded to check the back seat after shutting off the ignition.

“Door sequencing, that’s a misnomer,” Harrison continued. “That doesn’t detect anything… You can leave a watermelon in the back, it doesn’t distinguish between that and a living, breathing person.”

That morning in 2008 with Chase in the back seat, Harrison stopped at a laundry to drop off clothing. He says he ran in quickly and returned to the car, which would have disabled a system that relies solely on door sequencing. Then he drove straight to work, forgetting to drop his son at day care. The child died after being left in the car for nearly nine hours in summer heat.

Harrison’s case made national news. He was found not guilty of involuntary manslaughter for his son’s death. Since then, he has since urged Congress to pass legislation that mandate systems with sensors to detect the presence of children in back seats.

“I’m a father who made a terrible mistake, and I have to live with that every day,” he said.

Under the agreement announced Wednesday, carmakers would have leeway about the specific technologies they use, but at minimum they would have to include auditory and visual alerts that activate after a driver turns off the vehicle. Like Harrison, safety groups want a mandate requiring carmakers to install systems with in-seat sensors that detect the presence of a child. They also want Congress to force automakers to meet their self-imposed deadlines. 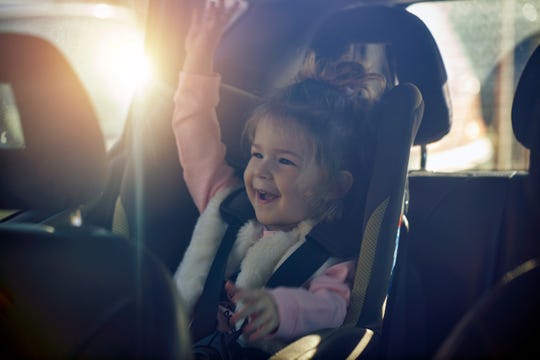 Last year, 53 children in the United States died after being left in the back seat, according to the National Highway Traffic Safety Administration. So far this year, 39 have died, according to Advocates for Highway and Auto Safety, a group that has pushed for warning systems. In the absence of widespread safety systems, some have suggested putting a purse or cellphone in the back seat to ensure you’ll turn around at the end of a drive.

The Alliance of Automobile Manufacturers and the Association of Global Automakers say the Wednesday’s voluntary pact covers carmakers in their membership ranks that make 98% of cars, trucks and SUVs sold in the U.S. All three Detroit carmakers said they would comply with the voluntary agreement; General Motors Co. said rear-seat reminders became standard with the 2019 model year.

But few vehicles are equipped with the more advanced systems that actually detect a child’s presence.

“Not only is this weak agreement voluntary, allowing manufacturers to choose to completely disregard it, glaringly missing is a requirement for the system to detect the actual presence of a child,” said Cathy Chase, president of Advocates for Highway and Auto Safety. She testified on the matter before the House Energy and Commerce in July.

“Without this key component, a major proportion of hot-car deaths will remain unaddressed as nearly 30% of these fatalities happen as the result of a child independently gaining access to a vehicle,” Chase continued. “Rear-occupant alert systems triggered by door sequencing and other non-detection techniques will fail families, and children will die as a result of being left unknowingly in hot cars.”

Legislation has been introduced that would require all new passenger vehicles in the U.S. to be equipped with the reminders, but the Trump administration has been reluctant to add new regulations.

Lawmakers who support the proposed legislation to reduce hot-car deaths applauded the voluntary agreement, even as they expressed hope for measures to be approved by Congress.

“We must ensure that the deadlines and goals outlined in this agreement are fulfilled, which will require robust oversight of industry and NHTSA by Congress,” U.S. Rep. Debbie Dingell, D-Dearborn, said in a statement. “It is encouraging to see that deploying life-saving rear-seat detection technology is a priority for the industry and that they are voluntarily moving to implement this industry-wide. No child should die in a hot car ever again.”