Kids are dying in hot cars at an alarming rate; safety agency tweets for awareness

The numbers are sickening: 10 children dead in 20 days.

They were little girls and boys who died in hot cars just in the last few weeks, a growing crisis that’s perplexing in part because experts say the deaths, many of them at least, are both unintentional and preventable.

Some automakers have deployed technological solutions, but making them standard on all new vehicles appears to depend on a divided Congress rather than regulators.

Hyundai has an optional back-seat motion sensor, which it has begun offering as an option on the Santa Fe and which it intends to make available on the Palisade and additional vehicles in the future. (Photo: Hyundai Motors)

On Tuesday, the federal regulator charged with overseeing the auto industry took action — of sorts. The National Highway Traffic Safety Administration announced a “Tweetup,” inviting the public to spread the word over Twitter on the dangers of heatstroke:

Just this year, according to http://NoHeatstroke.org , 34 children have died from being left or getting trapped inside a car. Temperatures can soar to deadly levels in minutes. Never leave your child alone in a vehicle and always #CheckForBaby. #HeatstrokeKills 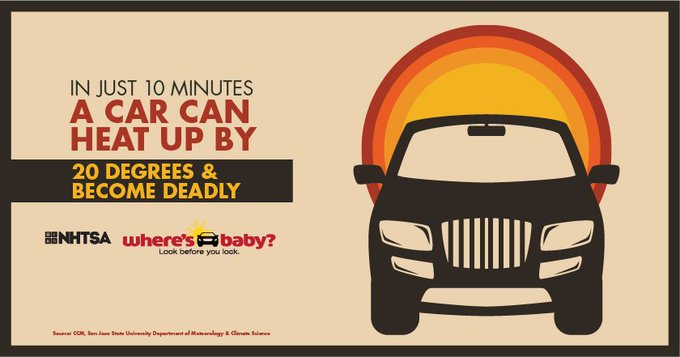 41 people are talking about this

Amber Rollins, a prominent safety advocate, said NHTSA’s approach is simply an inadequate response to a crisis that has killed hundreds of children in recent years. It’s largely futile, she said, to try to convince people to remember what is already the most important thing in their world.

NHTSA feels “that education and awareness are the way to go, and we just couldn’t disagree more. We’ve been doing education and awareness for 20 years. People know about hot car deaths and yet at the same time the number of children dying in hot cars is at an all-time high and so there’s some disconnect here,” said Rollins, director of Kansas-based KidsandCars.Org.

NHTSA issued a defense Wednesday of the Tweetup, noting it’s just one part of the agency’s strategy:

“The Tweetup is part of NHTSA’s broader, summer-long awareness campaign on vehicular heatstroke that includes $1.3 million in paid advertising and informational materials provided to state and local organizations across the country. NHTSA prioritizes education because, even if reliable and accurate child heatstroke prevention technology were available and installed on every new car today, it would not address the issue for the vast majority of the driving public for many years. “

Thirty-five children have died in hot cars already this year, including a 22-month-old girl in a minivan in New Jersey on Friday. That follows a disturbingly high toll in 2018, when 53 children died, according to KidsandCars.Org.

Rollins’ group is promoting legislation — specifically the U.S. House version of the Hot Cars Act of 2019 — which would mandate systems to detect back-seat occupants after the engine shuts off. The key point for Rollins is the requirement for “a distinct auditory and visual alert to notify individuals inside and outside of the vehicle” that someone is still inside.

Several automakers now offer a system that reminds drivers to check their back seats if the rear door was opened or closed before the vehicle was started. Hyundai, for one, goes further, with an optional back-seat motion sensor, which it has begun offering as an option on the Santa Fe and which it intends to make available on the Palisade and additional vehicles in the future. Kia, which is part of the same auto group, offers something similar on the Telluride.

Heatstroke does not only occur during the summer or in the Sun Belt States. This deadly issue can occur any time of year, in any weather condition, in any community—for any parent. #HeatstrokeKills #CheckForBaby 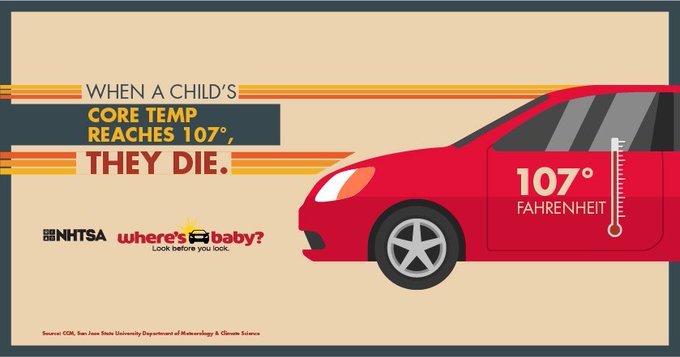 22 people are talking about this

General Motors has its own alert system (not all carmakers do), but Rollins’ group has criticized the company for not following through with its 2001 pledge to roll out sensor technology by 2004 “so sophisticated that it can detect motion as subtle as the breathing of an infant sleeping in a rear-facing child safety seat.”

GM issued a statement Tuesday promoting its system, which can issue audible alerts if a rear door was opened or closed but does not sense the presence of a child in the car, and explaining why it’s taken so long to have such technology in wide use:

“GM’s industry first Rear Seat Reminder technology was introduced in 2016 as an immediate next step to combat the issue of children left in vehicles. Rear Seat Reminder has been standard since 2019 on all of GM’s new 4-door sedans, SUVs, pickups and crossovers in the U.S. and Canada. The issue of children left in vehicles is an industry-wide issue and GM supports an industry-wide solution. Systems that accurately and reliably detect children in vehicles have not been widely deployed across the industry due to continued challenges with the accuracy of sensing systems given the broad number of vehicle/seating configurations and the varied positions of children in vehicles.”

A spokesman noted that “GM is committed to safety and continues to investigate technology for the accurate and reliable detection of children in vehicles.”

As a follow-up Wednesday, GM emphasized the importance of education:

“While Rear Seat Reminder is our primary technology that GM offers to help drivers remember to check the back seat, GM advocates that children should never be left alone in a vehicle. Public awareness and education are critical to mitigate these unfortunate events, including simple reminders that parents and caregivers can use.

A spokesman for the Alliance of Automobile Manufacturers, a trade group, said the auto industry is “exploring ways to assist in advancing the collaborative efforts needed to address this challenge. Even as the industry continues its work on this, public awareness and education remain critical, especially since there are roughly 280 million light-duty vehicles registered across the United States.”

NHTSA noted the challenge of finding one answer to the problem:

“We know that child heatstroke deaths occur due to a combination of parents leaving their kids in cars as they run errands, children entering vehicles on their own, and parents forgetting that their kids are in cars. There is no one-size-fits-all technological solution to these heartbreaking tragedies, which is why NHTSA reminds adults to look in the back seat before they lock their doors, ask themselves ‘Where’s Baby?,’, and keep their vehicles locked at all times. This is why NHTSA’s public education is critically important.”

Safety advocates’ focus on the need to push technological solutions is directly related to the belief, backed by research, that these deaths are almost never intentional. That parents — across races and income levels — who left their children in hot cars believed their children were in a safe place, rather than inside a sweltering car, where the temperatures, even on a cloudy day, can quickly become deadly.

“This is happening to incredibly loving, responsible and, in many cases, highly educated people, and it is not an intentional act,” Rollins said.

A few extra steps could prevent a young life from being cut short. Whether you’re a parent, guardian, or bystander, you can affect change. Visit http://NHTSA.gov/heatstroke  today for ways to bring an end to vehicular heatstroke. #CheckForBaby #HeatstrokeKills

An apparent correlation between the introduction of air bags and these types of deaths also poses a dilemma of sorts. Air bags save lives and the back seat is considered the safest place for a child to ride, but a child in a rear-facing car seat is not in plain view for a parent who might be distracted or assume he or she dropped a child off at day care.

“The high incidence of harm to children in hot cars has been linked to the installation of air bags in the front seat of vehicles in the 1990s, when drivers were first compelled to place small children in the back seat where they would not be harmed by air-bag deployment,” University of South Florida psychology Professor David Diamond wrote in a paper on the phenomenon.

Diamond’s paper was titled, “When a child dies of heatstroke after a parent or caretaker unknowingly leaves the child in a car: How does it happen and is it a crime?” It pins the blame on a type of memory failure.

Diamond asserts that when a child dies of heatstroke in a hot car, “it is a public health issue and a tragedy, but not a crime.” Despite such assertions, parents in these cases are often, although not always, charged criminally.